I have been working on my restaurant kitchen. I worked on the floor. I had copied this picture of blue tiles that I liked and I glued them all down. I added the white subway tile paper and gluing in the pot filler. (Quite happy that I managed not to lose it since I bought it/spray painted it.) I glued in the fruit tile picture I'd found and I glued in a shelf.

I also worked on the other wall, adding another subway tile on one side. (I had bought several different versions, but I was happiest with the one on the wall above.) And the shipboard on the other side (seen).  And I added the swinging door.  I haven't yet glued the wall in. 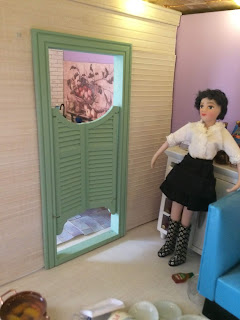 Because the range from TYA kitchen is large, as befits a restaurant, the range hoods available for purchase are too small. So I decided to make one. But I am trying not to shop for supplies, so I used what was around (but I am well-stocked):

I actually made this twice. In the end, my original version, which I took apart, was, maybe, the better version. Oh well.

I first put two pieces of cardboard together in the length of the range hood.  Then I drilled two holes in the cardboard where I wanted the lights to go. I put the lights in those holes.

I painted the mesh bag silver. It came out GREAT. I was really pleased with this result. I painted it on top of the cardboard, which gave the cardboard a silver bottom. I then first covered the cardboard in the aluminum paper, creating a slit where the light wires emerged. 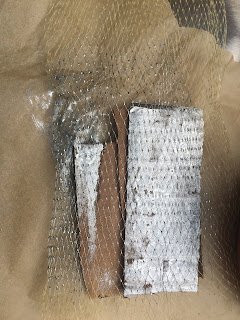 My friend suggested I use the aluminum sheets. I had forgotten I had the aluminum sheets, and I thought that they would look better. So I took apart the original one and re-did it.  Apparently, the trick for getting the edges is to score it first with a knife, although you may end up cutting through your aluminum. As my friend told me after she saw my latest creation. Lol. So that's the pro tip for anyone trying to make this from this tutorial.

I did not do that.

I just bent it around the cardboard and then I ended up denting it and giving it all sorts of weird angles.

Then I attached it to the ceiling with magnets because I want to be able to remove it for pictures.  Anyway, I am still pleased with it. Apparently, it's a well-loved, much used range hood. And I love my lights!

And here is the kitchen now: 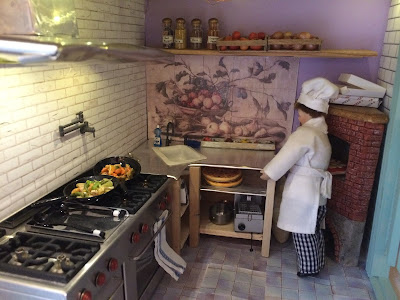 I still need to make a small refrigerator covered by a counter, glue in that wall and add potentially more shelves. Oh and paint the ceiling white.

Hope you are all doing well and #stayingsafe!