Cupcakes, and coffee for 10!

I tried 2 more projects from The Dolls House Magazine: the cupcakes and the coffee (April 2016).

I really liked the DHM suggestion of using paper to make the cupcake wrapper; I used origami paper.

A little cupcake party in the Malibu nursery: 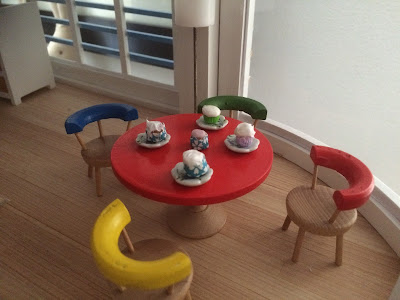 However, I did think that the cupcakes needed more of an umbrella top and that they did not come out that well.  Then I bought a cupcake-making kit from The Mouse Kitchen and made the cupcakes with the green and purple bottoms. I might try that kit using the origami paper as a wrapper.

I also wanted to try a different frosting, so for 3 of the cupcakes, I used the decoden cream (which I had bought to make the coffee below).  This also helped to give them more of a muffin top shape.  The green one just has white sculpey clay with a gloss paint on it.

Here are some of the original cupcakes before I put the decoden frosting on them.  I also made the flowers on the cake based on the instructions in the Dolls House Magazine (April 2016).  The flowers were supposed to go on the cupcakes, but mine were too big, so onto a cake they went!

I made the bundt cake using a mold from the Mouse Kitchen. 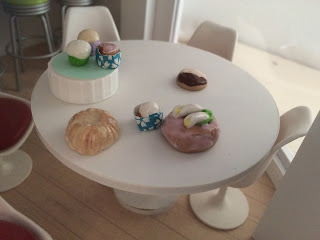 And here we are with coffee for 10!  Maybe some workmen are coming in for the mid-morning coffee at the Fat Cat Pub?   Actually, I had to make 10 for a NAME swap (theme: coffee/tea shop). 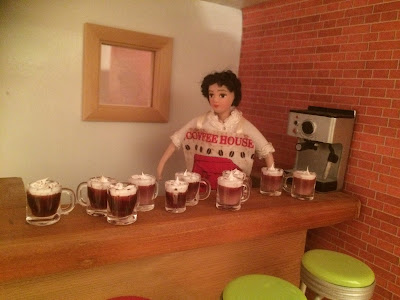 As per the article, I used brown deco sauce (I bought it from the MiniatureSweet Etsy store and it arrived quickly).  It seems to change color and then maybe change back again.  I also bought the decoden cream or fake whipped cream from them. So I piped that on top of the brown, once the brown deco sauce dried (which took about a week), and then I shaved some brown flakes (from chalk) as directed.

The doll is by Paola Ragonesi (she sells on Etsy).  Here she is with her fabulous boots.

I made her coffee shop apron (no sewing, just gluing with fabric glue). 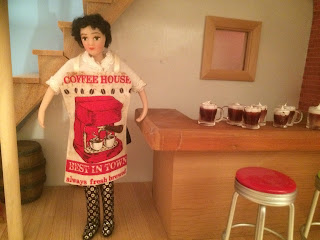 Hope you enjoy some cupcakes or cake this week!
Posted by Penelope at 7:54 PM 4 comments: 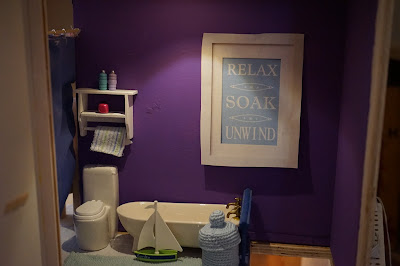 Here's the bathroom in 48.  I made the glass window by using plexiglass from HBS/miniatures.com and using channel wood.  I used a 1/4 inch channel wood (from HBS) as the track on the top and the botoom, and I glue narrower channels around the plexiglass to make the sliding window. The glass window slides out so they can access it. 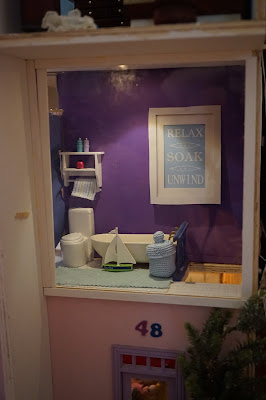 I also made a colorful curtain to give them some privacy from the others in the house -  as opposed to all the strangers that can just look in through the glass wall - I guess they face an ocean. :) 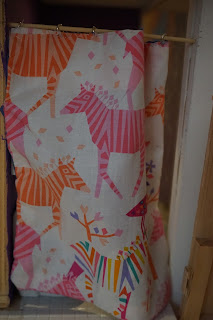 I used a bamboo skewer stick as the curtain rod. 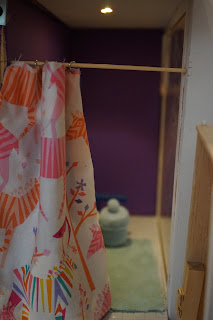