I am almost done packing up my Malibu dollhouse, as you can see.   My dolls are exhausted from all the packing.  They have collapsed on the floor. 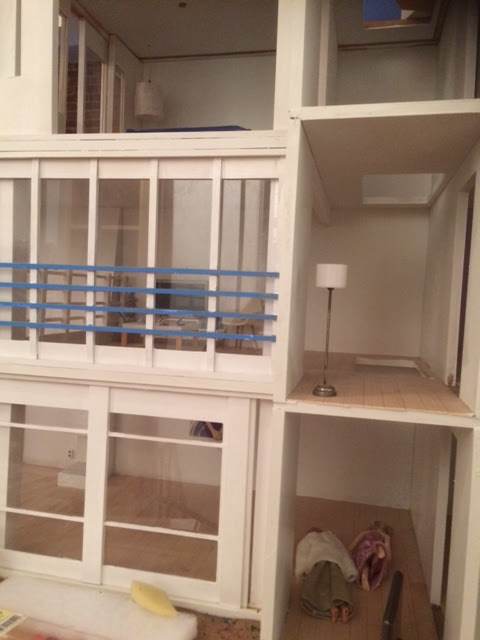 This True2Scale Forsythia Kit has been on my wish list for a very long time. 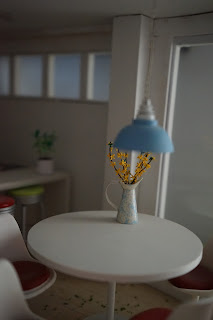 I love the French blue pitcher and I love forsythia.

As soon as the forsythia started blooming again this spring, I kept thinking I should buy it.
And since I was making pitchers, I thought I should buy it to see this pitcher design.  Good justification, right?  (Another funny thing is that I think I first didn't buy it several years ago because I thought it seemed complicated, but it's not (and probably my skill level/confidence has increased.)

It took me a few evenings, but it was very easy and kind of soothing to make.  I loved the way the paper became little flowers.

Unfortunately I did lose my pitcher's handle, so I had to make my own, and I made it a bit too big.  Also I realized that my paint came out too dark a green on the leaves.

But overall I am really happy with my forsythia and the beautiful French pitcher.

Through the windows of the Malibu kitchen (someone needs to clean up all the parsley on the floor that fell off the parsley plant when it got knocked down): 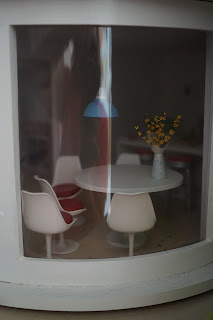 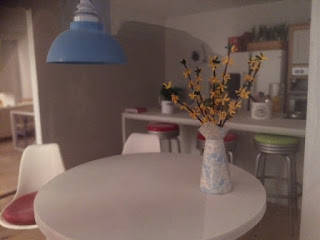 Every April, my club, the Big Apple Miniaturists, has a swap.  This year I signed up to do it.  (Last year I was traveling.)

Our project this year is a porch facade with a garden (although we haven't seen the completed version yet).  Mine will be shabby chic, although the porch facade has been modeled on a "Painted Lady" house.

I like to do swaps because it gives me motivation to try out various projects that I've been eyeing.

So, first I made this shabby chic mailbox based on the blog Cinderella's Moments tutorial.  This is a great tutorial - very detailed, lots of pictures and helpful tips.  It's also a great blog to follow for shabby chic. 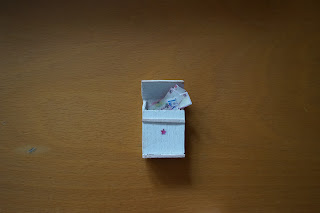 Then I made some pitchers based on this youtube tutorial (in French, but you could still figure out the patten and measurements easily): https://www.youtube.com/watch?v=PNjfGs7UtPQ (un broc pour le bakery) 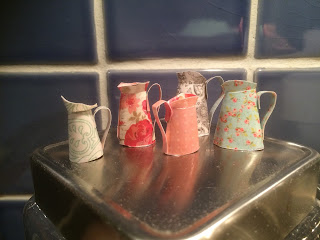 I thought about making parsley plants, but some club members are very good (i.e., professionals) at making flowers.

The pitchers were easy and fun, but I was waiting for the paper to arrive, so I started making mailboxes.   Plus I thought they would work well for a porch. Maybe next year, I will make the pitchers. :)

And here are 12 (and then I made an additional 2 more for my children, who each wanted one.) 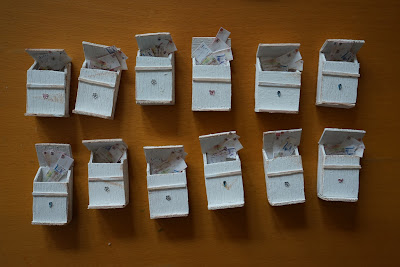 I put my mailbox outside my bakery door because it seemed to fit really well there (maybe I will make another for my porch): 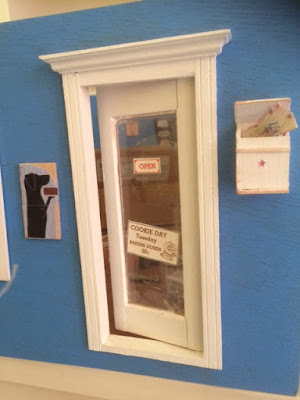 Have a great week!

In the middle of packing away all my dollhouse stuff, I signed up for a LED dollhouse lighting/soldering online class - because one of my goals for this year was to learn how to solder.

The online class was offered by Luci Hanson of Cascade Miniatures and LED-N-Minis.

I also recommend her website for LED lighting supplies.

Apparently half the class was from Canada.  (I wonder if it was a mini club).

First, there were pictures up on her website in the classroom section which showed step-by-step how to run  the tape and make the connections.  Then there was a class via chatroom which ran through those pictures, and then there was a video class where she did video demonstrations!  And then she answered questions by email all week - even sending mark-ups of the pictures that I sent her of my work to show how to improve/fix it.

She is offering another class this summer - I highly recommend it!

Right now I use the plug method and just attach plugs to all my lights with wires.  And it takes me ages to attach the plugs, so I thought soldering might be easier and more secure.

In the class, we first run our copper tape on a sample structure (which is not in any particular scale). Here are my copper tape runs - I made a few mistakes because I didn't run them close enough etc. (And I glued the building together wrong because I was trying to catch up in the class that I joined late.  But it still served its purpose.) 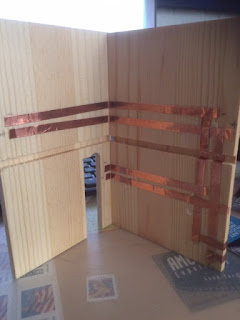 Since I haven't used copper tape before, I found this part of the class very useful, although I was late to join the online class and rushing to catch up.  I'd bought a copper tape kit years ago and read the book, but never actually ventured to do it.  (I also don't use wallpaper all that much).

And then on Monday I tried soldering for the first time after watching some Youtube videos.

I did manage to get the 9 volt battery holder soldered to the copper tape (and producing light when I touched the wires to it), but I did not succeed in getting my novalyte LED light soldered to the tape.

I'm afraid I burnt the wood. 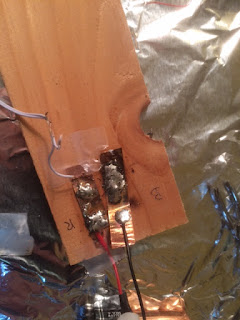 I emailed the instructor and she looked at my pictures and gave me some tips and instructions.

Right, I will try again! 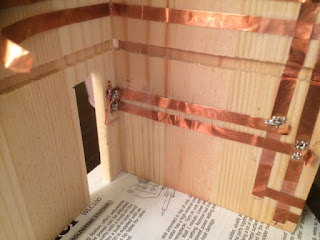 I seem to have gotten it soldered, although my solder kept first breaking off into little silver balls, which would eventually kind of melt in a plop when I applied the soldering iron.

You are supposed to apply heat to the copper tape (but I think not so much heat that it starts to curl - as mine did).  Then when you put your solder to it with the soldering iron, it should be so hot that it just melts.  That did not happen for me.  Room for improvement there.

Did my soldering work?

So now on to the connection to power.  I received a cord with spade lugs and 2 brass screws, so I atttached that. 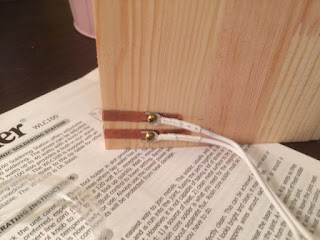 I attached the 9 volt power supply with the male solderless connection (yes, now as a result of this class, I know what that means).  And I hoped it would light. 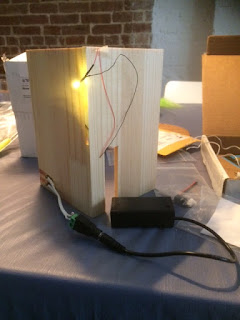 Super exciting!  So happy! (I keep turning it on to see it light up!  My family was also impressed.)  And I was also relieved.

And for NAME members, Luci is doing another intro class this Sunday during the online Sunday "chats".

A Big Thank You to Pepper of MitchyMoo Miniatures

I received the best Christmas present from Pepper of MitchyMoo Miniatures: lots of wonderful miniature goodies!

I am just sorry it has taken me so long to show them.

After opening the box again at Christmas, I put all the little miniatures back in their box and packed the box away in my MVP miniatures box (along with TYA Kitchen etc. (and some other stuff that I have been looking for which I forgot to index)), thinking the construction would happen soon . . .


Here is the small box (the best things do come in small packages): 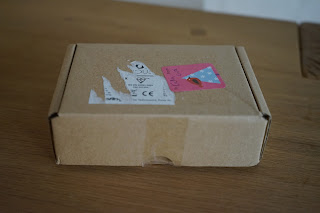 And then all the goodies:  I love them all! 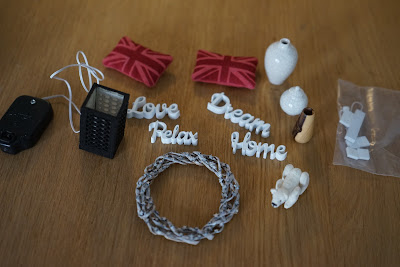 This wreath is so beautiful.  (I am still a bit perplexed on why mine is so soft.) 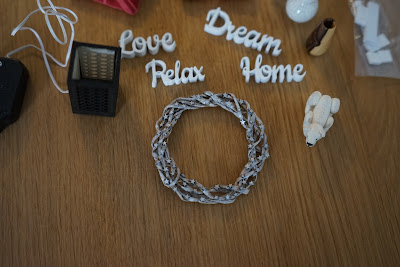 Beautiful pottery by Causeret, an adorable polar bear, and a beautiful wood vase. 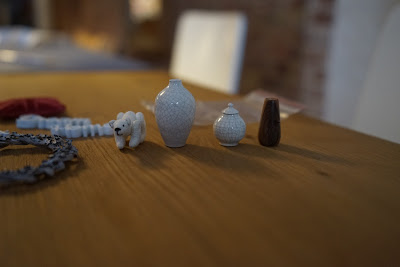 I love these pillows, the Japanese light (that works!), the electrical goods (my home is going to look so realistic!), and the words!  Pepper is so talented and generous. 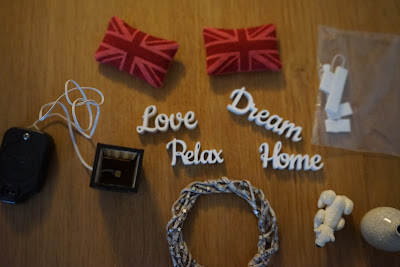 Another reason I can't wait until this renovation is complete and I can play with all these goodies in my dollhouses!

Thank you again Pepper!  And thank you most of all for being my friend :)