I decided to re-arrange my Malibu Dolls House living room for the moment - especially since I still haven't put in the stairs. 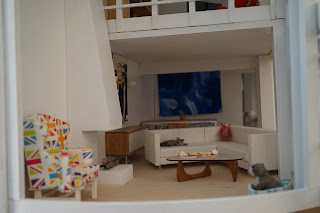 The cat is by Reve.  The arm chair is by InTheTwelfthScale from Etsy.   The colors seem to go well with my dining table chairs (coincidentally). 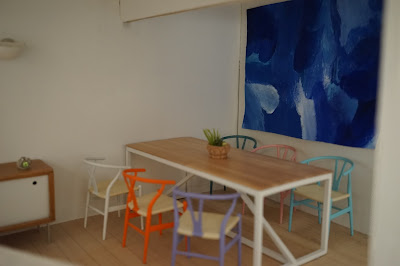 I bought the little cactus plant at the Tom Bishop show in Chicago from Le Miniature di Eurosia. 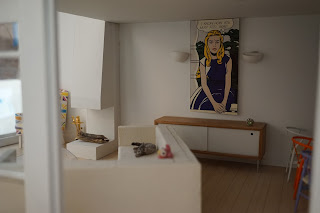 I am not sure what to do with the lofted space permanently.  I would like another child's bedroom rather than a family/TV room.  But a family/TV room is also a challenge.  I thought it would be fun to try a red theme.  Clearly, the family has just moved in since they have barely any stuff. 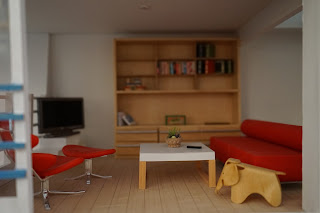 Coffee table and couch by Minimodernista.  Bookcase by Dolls House Emporium (I still miss when DHE would come out with their new catalogue in August with modern furniture offerings).   The TV and tiny remote is from eBay.    As I look at it, I think it needs some art work.

Thanks for stopping by!

So here is my first tent created during the NAME online Dog Days of Summer weekend.  I spent July evenings making backpacks and then my free August evenings making tents. :)

I bought this fabric inspired by Kikka's Marimekko prints in her dollhouse on her blog.  I am still planning to make a miniature comforter cover with it, but then then this project came along and I thought it would make a fun tent fabric. 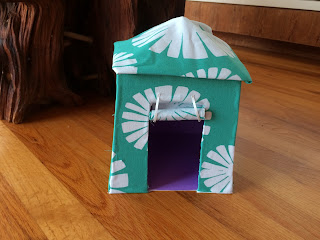 And here are some camping scenes with the swaps.  I am afraid that I was not very good at getting the scene/photographs to look completely realistic. 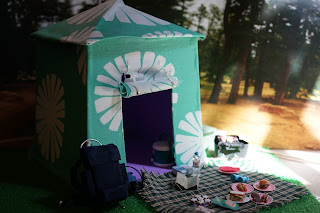 The forest backdrop was also provided as part of the NAME project, so it was fun to work with that. 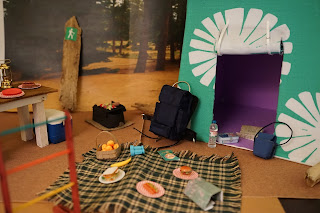 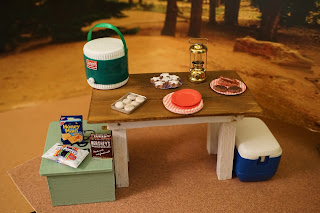 I bought some necessary camping supplies while waiting for the NAME swaps, though, such as the golden lantern (I particularly like its shape) and all the stuff for s'mores (from Sue's Little Things on eBay).   Although after I bought them, the Anne Vanture newsletter had similar ones as complimentary printables (www.paperminis.com).  The kebabs on the grill are from miniatures.com.

There is certainly a lot of food for my hungry hiking campers! 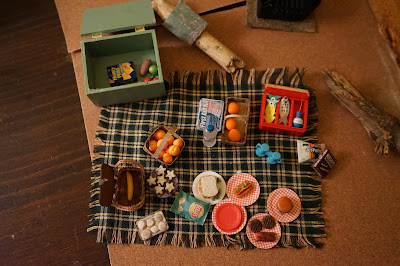 The basket of peaches is from Sharon Harbison Miniature Food at the IGMA show in New Jersey.  I made the oranges from another online weekend event class offered by NAME.

My daughter decided that we needed some people, so here is a dad and his daughter having a picnic after their hike (note the 2 backpacks in the back). 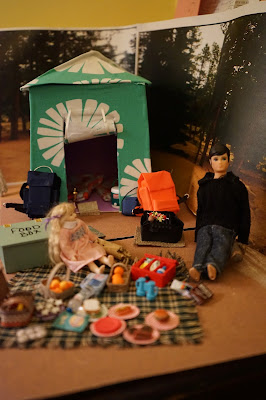 Hope you have a good weekend!
Posted by Penelope at 1:51 PM 4 comments:

So one of my favorite things about my NAME membership is participating in the swaps.   You choose your scale (1", 1/2. 1/4 or 1/144) and then make as many items as participants.

This summer's swap theme was "camping" because of the online "Dog Days of Summer" camping weekend event in August.  Luckily, right before the early July sign-up, I found an old Nutshell News issue (July 1997) with an article on how to make a hiker's backpack by Kitty Mackey!  And it seemed like something I could actually accomplish.  (Nutshell News noted the difficulty level as "easy.") 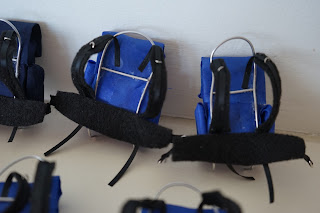 When I signed up on the last day, there were about 3 other people signed up for the 1 inch category on the swap database and I thought: "well, making 3 more backpacks is doable," but later that night, 3 others signed up.

So I spent many July evenings (we have some beautiful sunsets out in Long Island, New York) . . . 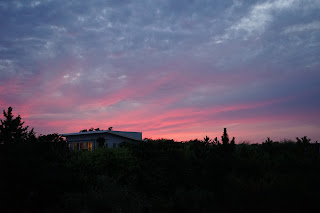 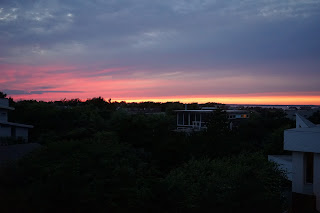 . . .making hiking backpacks (and one for me and one more for my daughter - which is not pictured since I was still working on that one at the time of this picture) 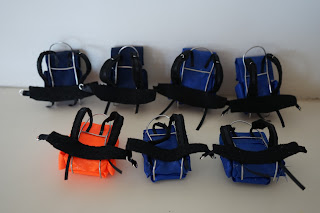 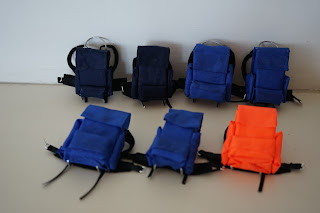 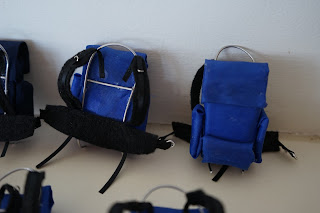 I modified some of the instructions to use what I had on hand.

I was super pleased with them, although they definitely look like they have been taken camping!  And off I sent them in the mail to the NAME swap coordinator.

And then in August, I received my return swaps: 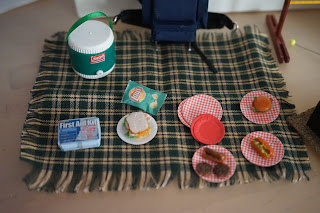 Everyone made such amazing things!  I think the water cooler (made out of soda bottle caps is particularly brilliantly done), but all the food looks professionally made as well.

Someone also made this ladder ball game with such beautiful bright colors, the black grill with a top that is hinged, and a  green "food box" with food (apples, potatoes, star cookies and buns on a tray). 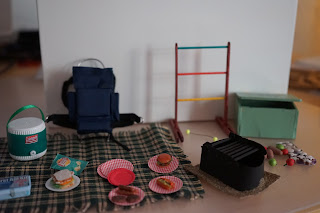 Next up: another camping scene - with the swap gifts!

Hope you are enjoying September!

NAME (National Association of Miniature Enthusiasts) (although they also have over 100 international members) had a "Dog Days of Summer" Online Camping event in August where they provided instructions online on how to make these miniature tents and other things (picnic tables, grills, etc).

I made the tent and 2 matching sleeping bags,and then set up this scene outside.

The maps, hiking sign and the green grill (in case you are wondering what that is) are printables from the Nutshell News July 1997 issue.

Of course, I am not exactly sure how any mini people are going to be able to hike through that thicket behind them :) 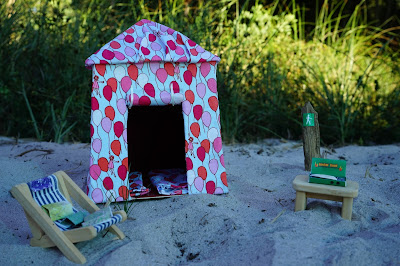